Everything you need to know about staying compliant with California Assembly Bill 434 (AB 434) and the the Unruh Civil Rights Act. 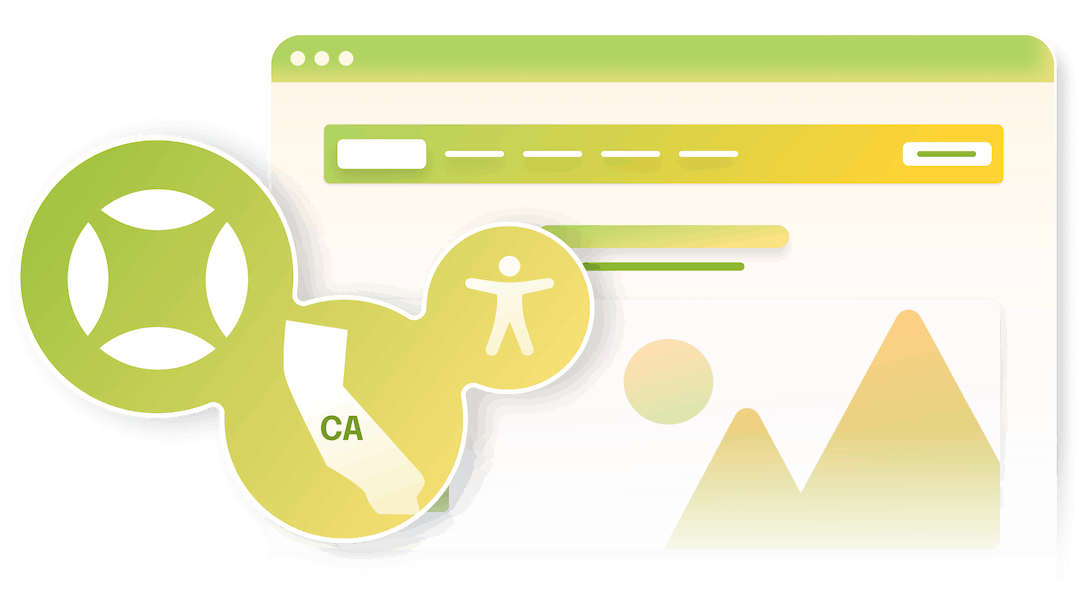 What are the Web Accessibility Laws in California?

The State of California is one of the most advanced in the U.S. when it comes to ensuring equal rights for people of all physical abilities. California has supplemented federal laws (Section 508 of the Rehabilitation Act and the Americans with Disabilities Act) with its own state-level legislation to prevent discrimination against people living with disabilities. For state agencies and entities, the relevant state-level legislation is California Assembly Bill 434 (AB 434), introduced in 2019. For businesses, the relevant legislation is California Civil Code §51, usually referred to as the Unruh Civil Rights Act. Learn more about California compliance.

Some interpretations of the law argue that the Unruh Act even applies to out-of-state businesses that have customers in California but no physical presence in the state. For example, a 2020 lawsuit (Thurston v. Fairfield) in the Court of Appeals of California determined that a Georgia-based online retailer fell under the jurisdiction of the Unruh Act. Read more about how the Unruh Act was used in a digital accessibility lawsuit for another out-of-state business.

Effective July 2019 onwards, California AB 434 requires that all websites of state agencies and entities must be accessible to users of all abilities. Specifically, websites must conform (at minimum) to Level AA of the W3C’s Web Content Accessibility Guidelines (WCAG) 2.0. Even before the introduction of California AB 434, Californian state agencies and entities were required to comply with Section 508 of the Rehabilitation Act – a federal law applicable to all agencies in receipt of financial assistance from the federal government.

California AB 434 requires all state agencies in California, and any contractors working for them, to ensure that their websites conform to Level AA standards of WCAG 2.0. Level AA is the goal that most organizations aim for, not least because some elements of Level AAA conformance are unlikely to be achievable in practice.

Under AB 434, all state agencies in California must display on their home pages a signed certification that they conform to Level AA of WCAG 2.0. To stay ahead of the curve, AudioEye always rapidly adopts the latest WCAG standard – currently 2.1 – and assists organizations in achieving and maintaining substantial conformance with WCAG Level AA criteria.

Title II of the ADA applies to state and local government entities throughout the U.S., prohibiting discrimination on the basis of disability in all services, programs, and activities provided to the public. Like California AB 434 and Section 508, Title II of the ADA uses WCAG conformance as the benchmark for measuring compliance.

What is the Unruh Civil Rights Act?

Enacted in 1959, California Civil Code §51 is more commonly known as the Unruh Civil Rights Act after its author, Jesse M. Unruh. The act stipulates that “all persons within the jurisdiction of [the State of California] are entitled to full and equal accommodations in all business establishments regardless of their sex, race, color, religion, ancestry, national origin, disability, medical condition, genetic information, marital status, or sexual orientation.”

The Unruh Civil Rights Act was updated in 1992 to include people with disabilities in the list of those entitled to full and equal accommodation. At the same time, the act adopted the standards set by the ADA, so that failure to achieve ADA compliance also equals failure to comply with Unruh – a fact repeatedly confirmed by judges in California.

Many U.S. courts have consistently ruled that websites are included among these places of public accommodation. This was tested at the highest level in 2019, when the U.S. Supreme Court denied petition from Domino’s Pizza, letting stand the two lower court rulings that the ADA does indeed apply to the accessibility of websites.

What is the Risk of Non-Compliance?

Businesses in California that achieve compliance with the Unruh Civil Rights Act (and, by extension, with Title III of the ADA) benefit not only from reduced legal risk but also from great improvements in user experience and the ability to reach much larger audiences. In the U.S., 61 million adults are living with a disability; worldwide, people with disabilities control an annual disposable income of $1.2 trillion. Businesses can therefore potentially achieve a considerable return on their investments in website accessibility.

For state and local government organizations, compliance with (as applicable) California AB 434, Section 508 and Title II of the ADA means reduced legal risk, improved ability to attract and retain the most talented employees regardless of physical ability, and enhanced ability to deliver services to all citizens.

How Can I Make My Website Compliant With California Accessibility Laws?

While organizations in California face the burden of compliance with both federal and state laws around website accessibility, the good news is that the technical requirements for all these pieces of legislation boil down to achieving substantial conformance to Level II standards of WCAG 2.0.

To assess your website’s performance on the four principles of WCAG accessibility means carrying out extensive testing – not just once, but on an ongoing basis whenever the content or structure of your website changes. Free tools such as accessibilitytest.org can be a great help, but they can only ever identify a small fraction of accessibility issues. Equally, many of the WCAG guidelines are subjective, so you need to bring human expertise and judgement into the equation.

To help meet California accessibility standards, the optimal approach is to combine automated compliance software, such as AudioEye’s advanced AI-powered scanning, with expert consultancy for detecting and fixing errors.

Find out if your site is accessible for people with disabilities and meets WCAG, and other requirements. 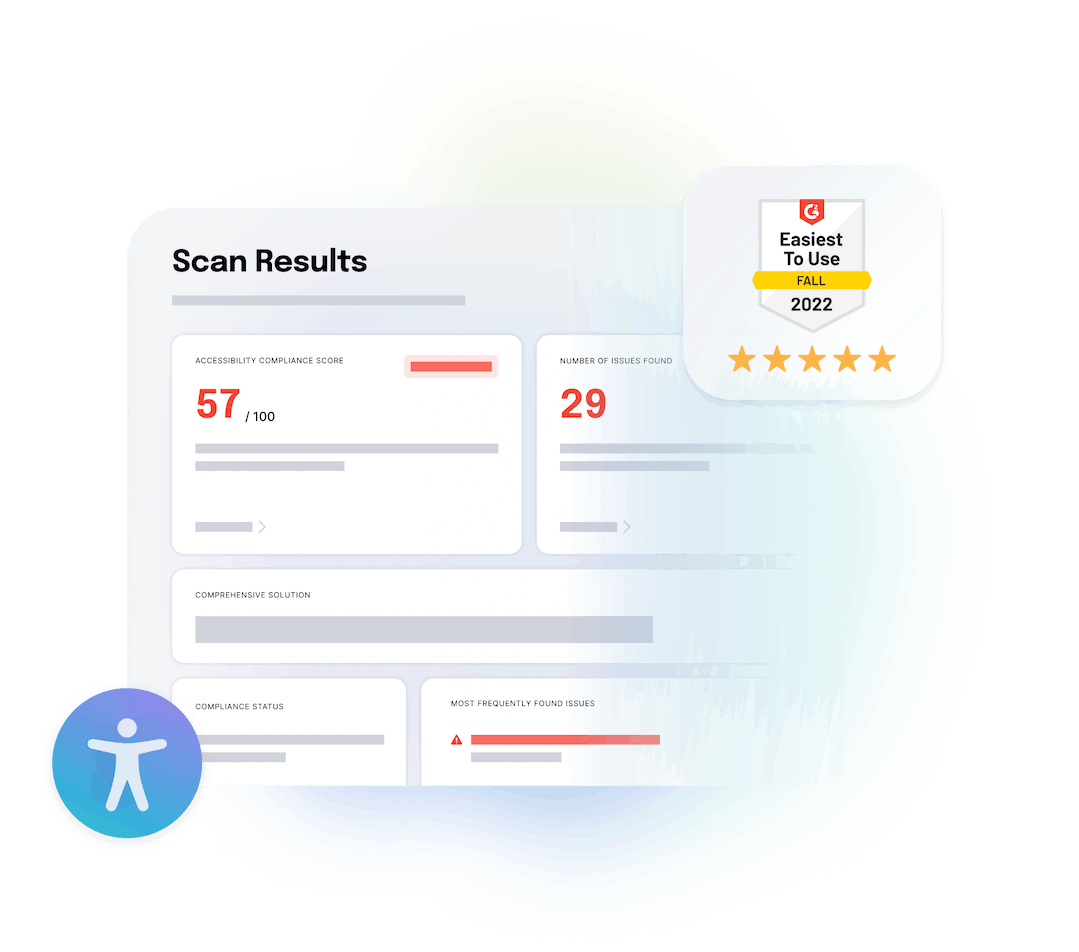