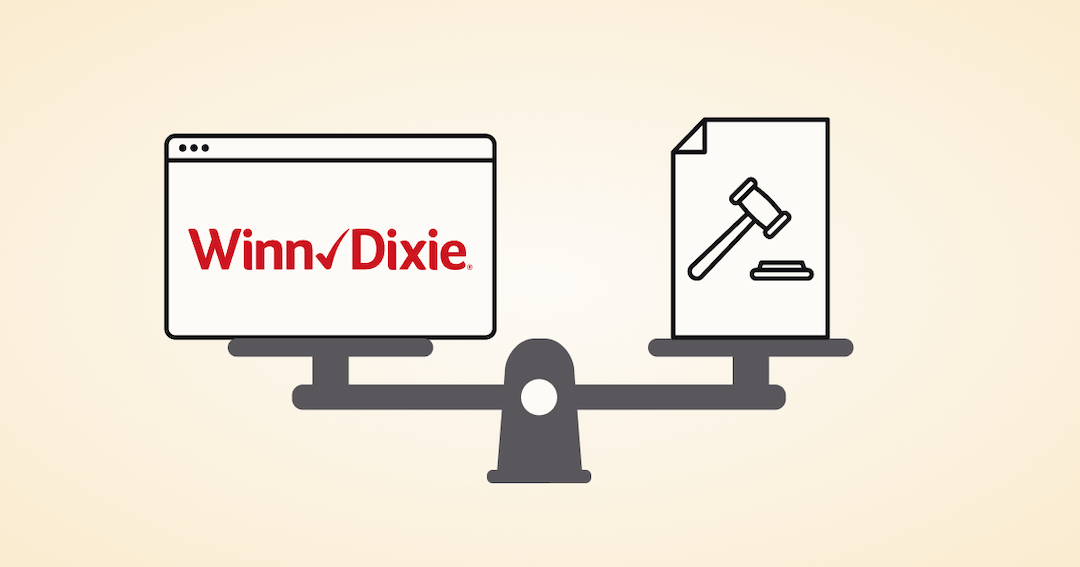 The world of website accessibility has been abuzz lately thanks to a new ruling on the widely watched Gil v. Winn-Dixie case from the United States Court of Appeals for the Eleventh Circuit.

The court, which has jurisdiction over federal cases originating in Alabama, Florida, and Georgia, vacated a 2017 Florida district court decision that said websites must be considered places of public accommodation under Title III of the Americans With Disabilities Act (ADA). However, the Eleventh Circuit's decision does not mean that websites no longer have to be accessible. In fact, the court explained that its ruling was limited to the particular facts in Winn-Dixie's case.

Because this decision may have muddied the water for website accessibility, we will walk you through some of the basic facts about the case and provide the AudioEye point of view on what this means.

In 2017, plaintiff Juan Carlos Gil sued Florida-based supermarket chain Winn-Dixie in the U.S. District Court for the Southern District of Florida. The case is considered the first-ever ADA website case to go to trial.

At the time of the suit, Winn-Dixie did not sell groceries on its website. In fact, the site didn’t sell anything. The key Winn-Dixie website functions Gil wanted to use allowed customers to 1) find the locations of Winn-Dixie stores, 2) link digital coupons to user rewards cards for use in-store, and 3) make prescription refill requests for in-store pickup.

According to Gil, the prescription refill function was especially attractive because it would allow him to maintain his privacy (he wouldn’t have to worry about people overhearing his private discussions with the pharmacist) and avoid lengthy in-person waiting times.

Because Winn-Dixie’s website was not compatible with Gil’s screen reader, he argued that his rights had been violated under Title III of the ADA.

On April 7, 2021, the Eleventh Circuit Court of Appeals overturned the district court’s decision. It found that websites, in and of themselves, are not places of public accommodation and stated that Title III is limited to “actual, physical places.” Although the court said that the ADA might apply to websites that served as extensions of physical spaces, it ruled that Winn-Dixie's site was not such an extension.

According to the decision, “Winn-Dixie’s website has only limited functionality. Most importantly, it is not a point of sale; all purchases must occur at the store. Further, all interactions with Winn-Dixie which can be (although need not be) initiated on the website must be completed in-store.”

The decision went on to say, “Although Gil was not always happy with the speed or privacy of the service he received at the pharmacy, nothing prevented Gil from refilling his prescriptions during his time as a Winn-Dixie customer.”

Ultimately, the court found that Winn-Dixie's website did not violate the ADA because the site didn't function as an intangible barrier to its stores.

Will the need to make accessible websites go away?

The Eleventh Circuit's decision does not mean that websites no longer have to be accessible. Their decision was specific to the Winn-Dixie case (most importantly, the fact that the company’s website was not a point of sale). Even in the Eleventh Circuit (Alabama, Florida and Georgia), websites with point-of-sale features (like most e-commerce sites) would likely be considered extensions of physical locations and would therefore be required to be accessible to people with disabilities.

We cannot overstate how important it is to continue making improvements to website accessibility. Now is not the time to abandon your company’s commitment to making its site more accessible.

What does AudioEye think about the ruling?

AudioEye follows litigation matters relating to website accessibility very closely. We are disappointed with the outcome of this case and believe that Judge Jill Pryor’s dissenting opinion more correctly understands the intent behind the ADA.

We continue to believe that the vast majority of websites remain subject to the guidelines of the act.

Given the state of disagreement among the federal courts on how the ADA applies to websites, we expect the matter will soon be clarified by the Supreme Court or by Congress.