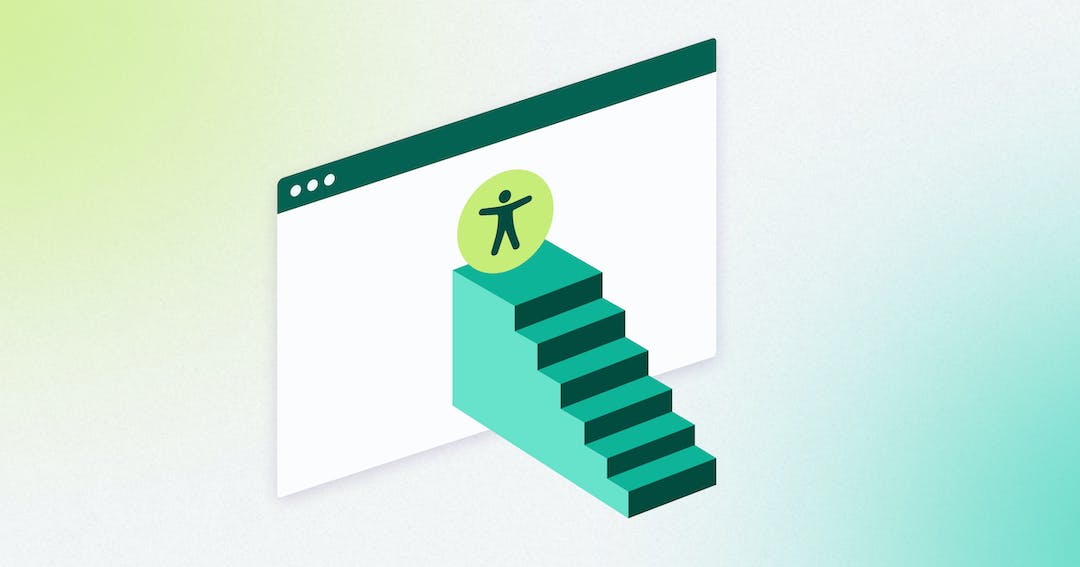 Summary: According to the Department of Justice, most websites must comply with the Americans with Disabilities Act (ADA). Here’s what you need to know.

The Americans with Disabilities Act (ADA) prohibits discrimination against people with disabilities, defined as anyone with “a physical or mental impairment that substantially limits one of more major life activities.”

Discrimination against people with disabilities isn’t just a question of individual action. Infrastructure itself can be discriminatory. Buildings with steps, but without ramps, violate the ADA. Similarly, websites and digital services may not be built for everyone. That means they fail to comply with this legislation.

Compliance with the ADA can’t be achieved with a simple list of design features (though those can help). Accessibility in digital spaces takes thoughtful design, a strategic approach to building digital services. Web designers must begin with an accessibility mindset that informs everything they build.

But in practical terms, what does ADA compliance mean for websites? Here’s a quick introduction. 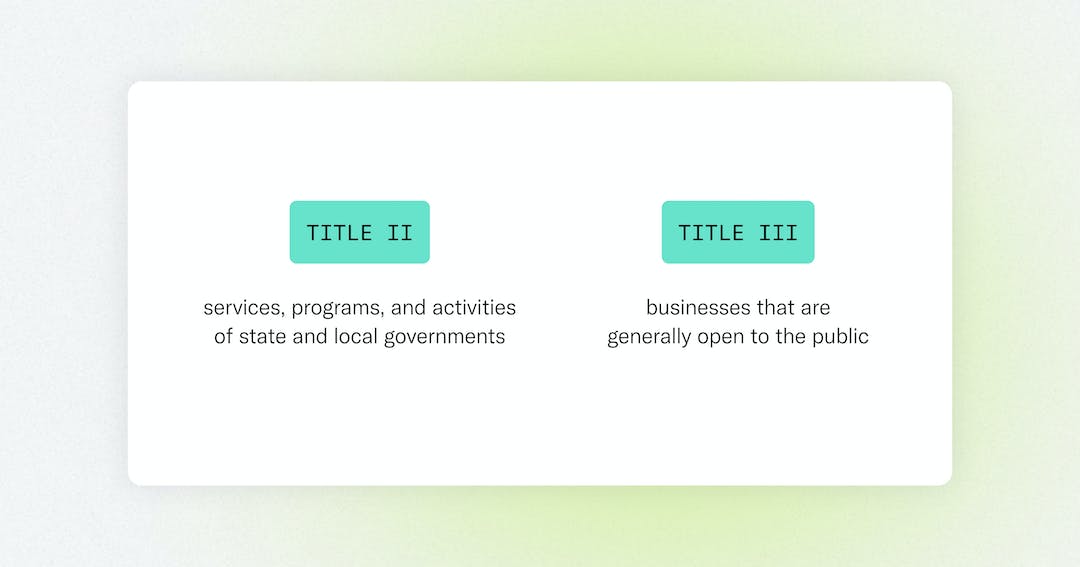 Two of the five sections of the ADA show up most often in accessibility lawsuits and the Department of Justice’s (DOJ) enforcement actions related to websites.

The ADA was ratified in 1990, when websites and digital services were much more limited than they are today. As a result, it doesn’t mention digital accessibility directly. Still, decades of legal precedent have established the ADA’s coverage of websites and other digital services.

So has the DOJ’s explicit legal position. According to the DOJ, Titles II and III do apply to web services.

But while the ADA prohibits discrimination in digital spaces as much as physical ones, it doesn’t tell webmasters exactly how to comply with that mandate. The DOJ says that businesses and governments have “flexibility” in compliance actions — but that ADA compliance is mandatory.

That flexibility has created a confusing ecosystem for website owners. What does ADA compliance mean as you’re designing (or refining) a company website? 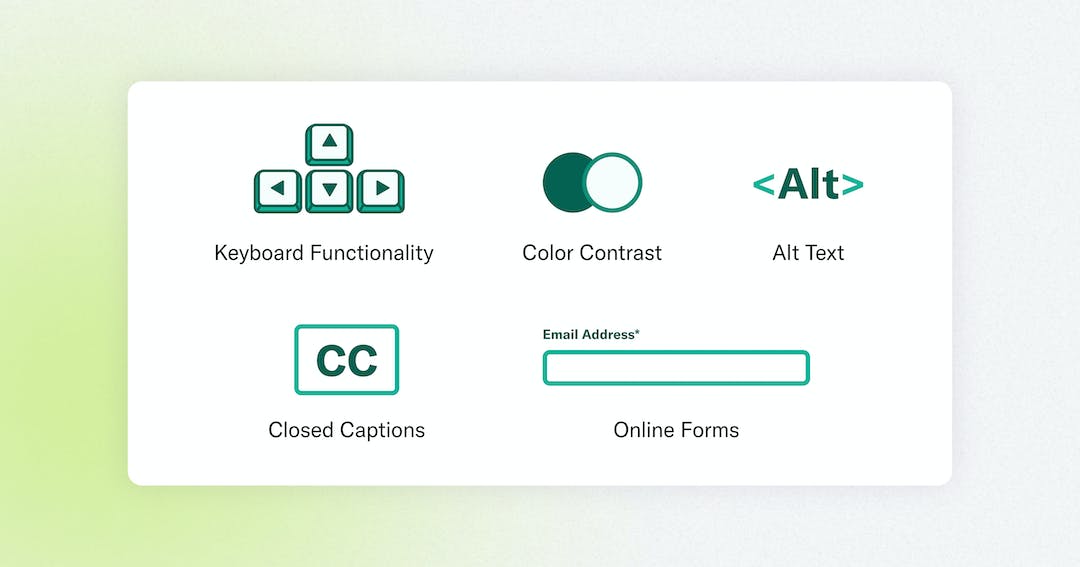 People with motor disabilities may not use a mouse. To avoid excluding these users, build keyboard navigation into site functionality.

When text is a similar color to the background, people with color-blindness or other vision impairments may not be able to read it.

Alternative text (alt text) provides descriptions of images, essential for people who use screen readers to get the information embedded in a chart, illustration, or photograph. Missing alt text is a barrier to these users.

Without captions, people with hearing disabilities may not be able to access information in a video.

Without clear field labels and simple instructions, some users with disabilities may struggle to complete forms — and so might everyone else.

These are just a few examples of potential ADA violations. For more comprehensive help with ADA compliance, the DOJ recommends the Web Content Accessibility Guidelines (WCAG). Published by the World Wide Web Consortium (W3C), WCAG is the most widely cited international standard for digital accessibility. Complying with the latest version of WCAG demonstrates a reasonable effort to comply with the ADA and other disability non-discrimination laws. 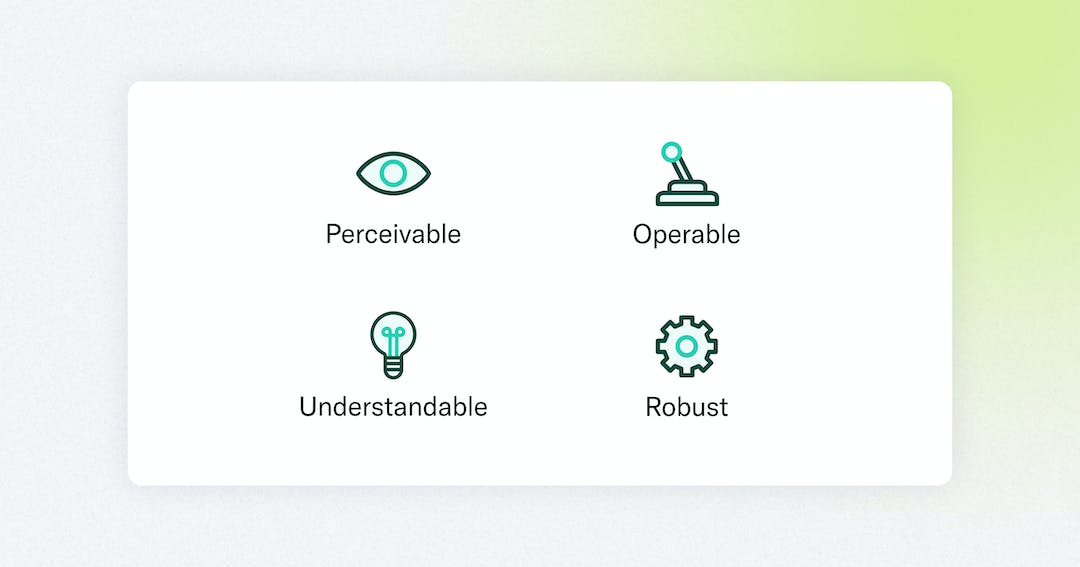 While WCAG hasn’t been officially added to the text of the ADA, it provides the leading global authority on accessible web design. It’s been officially adopted as the standard for compliance with other digital accessibility laws, such as Section 508 of the Rehabilitation Act.

It can be difficult to tell where your website fails to comply with WCAG success criteria. In order to uncover and correct these accessibility flaws — which can violate the ADA — website owners should conduct regular testing. Good news: Help is available.

AudioEye offers a comprehensive suite of tools and services to uncover digital accessibility issues, and to correct them. We believe in a hybrid approach to web accessibility, using automated tools and teams of expert testers — including people with disabilities who use assistive technology every day — to find and fix the potential ADA violations hidden on your website. We also offer accessibility training for your team, taught by instructors certified by the International Association of Accessibility Professionals (IAAP).

Begin your path to ADA compliance with the free Website Accessibility Checker. Enter your URL to receive a detailed report on common accessibility flaws, complete with recommendations that can help you begin your journey toward ADA compliance.

AudioEye gives you real-time insights into the accessibility issues on your website to help you create inclusive, barrier-free content for all your audiences, regardless of their ability. Begin your path to website accessibility compliance by testing a webpage with the Website Accessibility Checker.